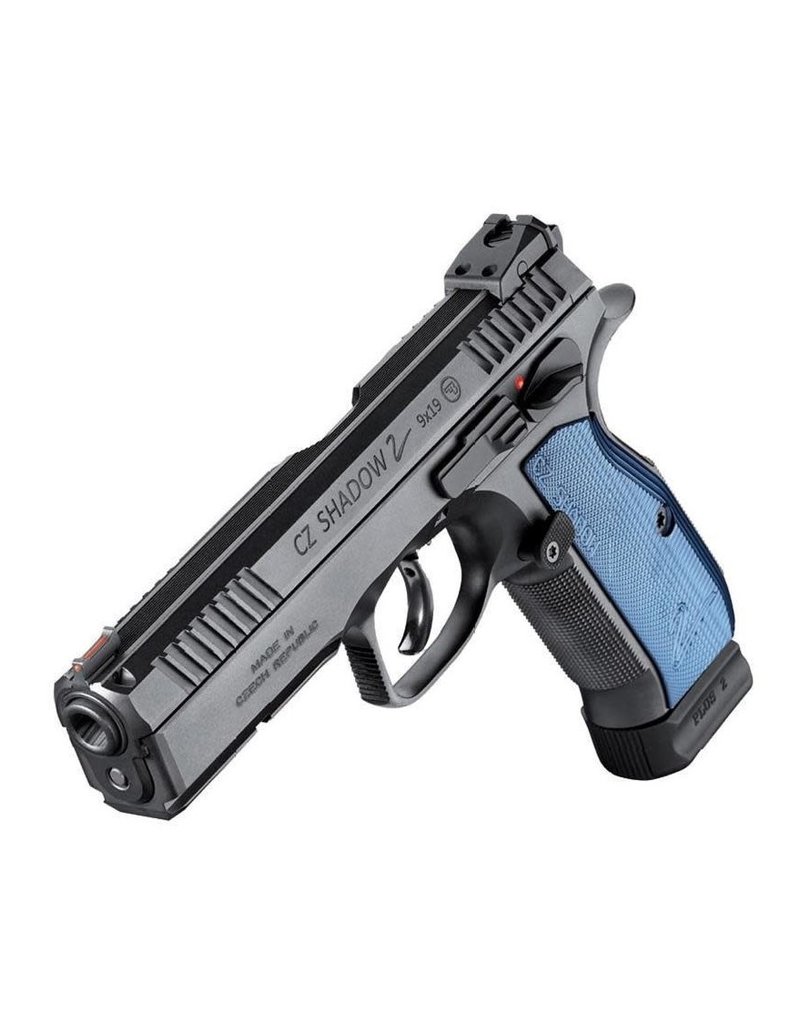 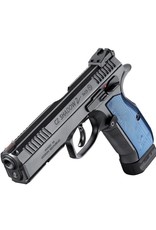 The CZ Shadow 2 represents the evolution of the immensely successful CZ 75 SP-01 Shadow. Born out of a necessity to compete with newer, up-and-coming pistols in its class, the second coming of the Shadow takes its already near-perfect design points and properties and raises it to another level, increasing the bar to a place it's never been before. Much input was harvested from the CZ Shooting Team, representing the elite target audience, over more than 2 years of R&D.

The Shadow 2 delivers upgrades principally on the slide, frame, and barrel. The new grip is a variation on the tried and tested Shadow 1 and allows the shooter to get their hand as comfortably close as possible to the barrel axis, thus reducing perceived recoil and making it easier for the shooter to control the muzzle and stay on target. New checkering on the front and back of the grip ensures absolutely reliable contact with the firearm in any shooting condition. The new slide has different cocking grooves than its predecessor, adding to both the stylishness of this new pistol as well as to its function, having been designed to provide positive manipulation on its low-profile slide.

The barrel has been increased to 5", which, along with its increased sight radius, has the effect of increasing velocity, stability, and accuracy of each fired round, as well as adding more weight to the front part of the frame, resulting in not only a higher degree of precision, but a higher level of compensation and a gentler recoil. The innovative trigger mechanism has a smooth action, a low resistance and a shortened trigger reset. The already prevalent magazine catch is made even more easily accessible and is adjustable to the shooter's preferences, which is crucial to efficient and rapid reloading. Aluminum grip panels, anodized blue, offer a little more weight and texturing for even more positive contact and control with the pistol during shooting.

The manufacturing process for the CZ Shadow 2 was also revamped, completely different to the original Shadow. Ultra modern robotic machining centres were used, allowing a completely different and elevated level of serial production without the usual marks. A higher level of precision in the manufacturing process positively reflects on the consistency of tolerances and, by extension, the accuracy of the firearm. Consequently, it significantly increases the durability of the main parts, aided by its Arcor surface finish which is prevalent among CZ pistols, and provides outstanding resistance to wear and corrosion by reducing friction and stress, thereby contributing to better operation and function of the pistol as a whole.

The CZ Shadow 2 was built for competition, ready for matches and ready to take a stand and deal with rivals in its own class of pistol. While those have so far focused on the design features and success of the Shadow 1, the Shadow 2 has not just improved the crucial details that have made it so successful to date, but it has significantly redesigned the main parts too, taking full advantage of the possibilities opened up by the recent modernization of technology.

During testing, hundreds of thousands of rounds were fired under real competition conditions. In the same manner, compared to using the original Shadow model, the members of the CZ Shooting Team achieved a degree of acceleration in units of seconds in individual IPSC situations. At the beginning, suggestions and ideas were provided by the best IPSC shooters on the planet. At the conclusion of more than two years of the research and development process, there is now a unique new firearm, which will inevitably become the rightful successor to the original model. The CZ Shadow 2 is now really Competition Ready!